By contrast 47% of survey respondents list unemployment as biggest such issue, 11% say poverty

The issue of “Unemployment/job creation/too few jobs” is seen as an absolute priority for almost 9 out of every ten South African adults (87%) when asked: “What are the most important issues or problems facing this country that the NEW government, elected in 2014, should address?”[1]

From 19 September 2014 to 24 October 2014, a total of 3,608 randomly selected adult South Africans were interviewed in their homes and home languages (see Technical Detail at the end of press release for more information).

Respondents were first asked to mention all the issues they considered as important for the government to address and then to choose only ONE issue as the MOST important.[2] Old and young people, people who are working and those who are unemployed and supporters of the three biggest parties in Parliament all put the issue of job creation at the top of their agendas.

This is the most important finding from the latest Ipsos Pulse of the PeopleTM study – but it is remarkable that this same issue has been at the top of the “People’s Agenda” since 1994. “Analysts have argued in the past that the government per se cannot necessarily CREATE jobs, but few will disagree that the government is responsible for creating the broad economic framework in the country, the conditions conducive to economic development , labour legislation, education and training policies, energy planning and the managing of supply, infrastructure development, enhancing trust in the leadership and the legislative process – all factors that, among others, influence the ideal environment needed for job creation,” said Mari Harris, Public Affairs Director at Ipsos South Africa.

The image below summarises the findings of the two questions.[3] As can be seen from the results, there is broad consensus that 10 issues should top the government’s plans in the future: 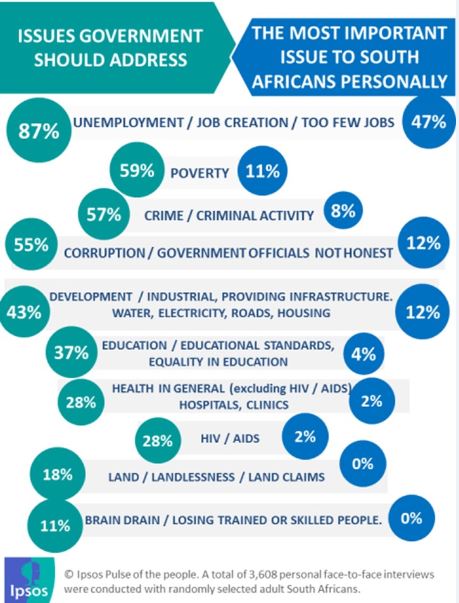 Apart from job creation, the issues of poverty, crime and corruption were also spontaneously mentioned by more than half of adult South Africans. Infrastructure development and education are on the list of about four in every ten South Africans, while the issues of healthcare and HIV and AIDS are mentioned by about three in every ten. Almost a fifth mentioned landlessness and land claims and a tenth the brain drain – the process by which the country loses many skilled people. However, these last two issues are not on the list when South Africans are asked to choose only one most important issue from the list.

In the next table the results are given in more detail – showing priorities of different age groups and the supporters of different political parties. The opinions of people who are working either full-time or part-time or are unemployed are also shown. 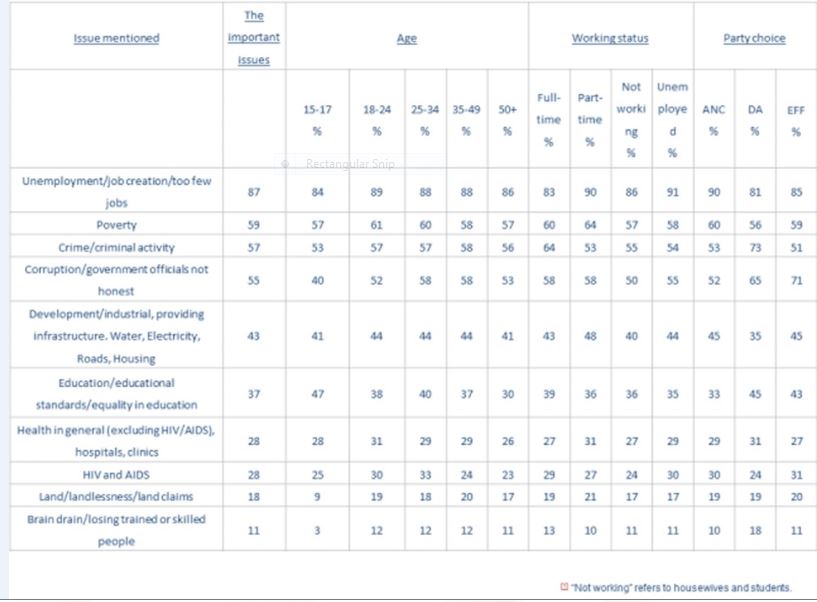 How is the government performing?

These polls are undertaken every six months. Respondents were asked to indicate whether they thought the government was doing “Very Well”, “Fairly Well”, “Not Very Well” or “Not At All Well” in handling different policy areas.

In the table below the People’s Agenda is compared to the performance of the government as measured in the GPB – related issues are indicated. In seven of the ten important issues the government’s performance receives a pass mark (i.e. 50% or more). As far as the distribution of welfare payments[4] and the addressing of the problem of HIV and AIDS are concerned, two-thirds of adult South Africans think the government is doing very or fairly well. Almost six in every ten (58%) are happy with the government’s addressing of the educational needs and slightly smaller proportions feel the same way about basic health services (56%) and basic services (55%).[5] Just about half of South Africans think the government is handling the building of houses and access to land very or fairly well. 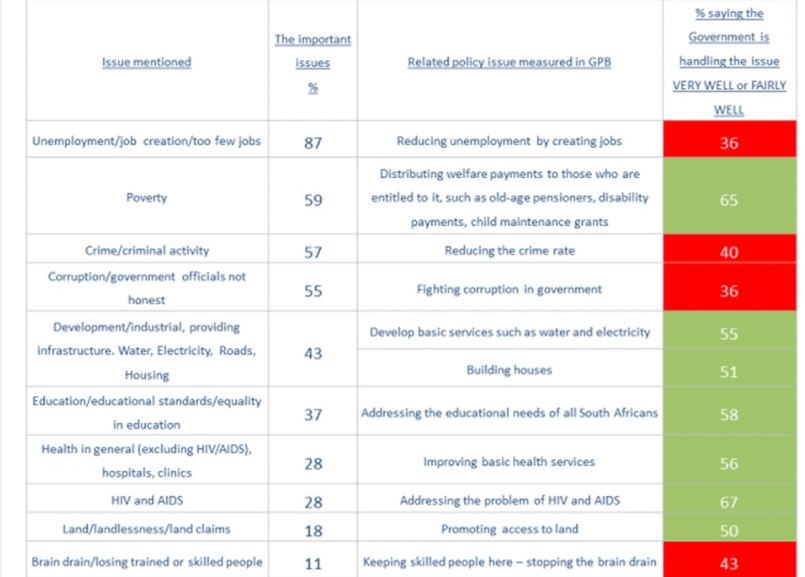 However, in four of the critical areas: job creation, reducing the crime rate, government corruption and the “Brain Drain” the proportion who think the government is addressing these issues very or fairly well are well below a “pass mark”. It is interesting that in the case of these four issues, only one in every ten South Africans is saying that the government is handling the particular issue “Very Well”.

Looking at the “People’s Agenda” in relation to the State of the Nation address on Thursday and the legislative year of 2015, the population is quite clear in its priorities. South Africans are anxiously waiting to hear if and how these issues will be addressed.

A total of 3,608 personal face-to-face interviews were conducted with randomly selected adult South Africans. The interviews were done in the homes and home languages of respondents. Trained quantitative fieldworkers from all population groups were responsible for the interviewing, which took place from 19 September to 24 October 2014. Interviews were done all over the country, from metropolitan areas to deep rural areas. This methodology ensured that the results are representative of the views of the universe and that findings can be weighted and projected to the universe – i.e. South Africans 15 years and older.

Interviews were conducted using CAPI (Computer Assisted Personal Interviewing) and all results were collated and analysed in an aggregate format to protect the identity and confidentiality of respondents.

All sample surveys are subject to a margin of error, determined by sample size, sampling methodology and response rate. The sample error for the sample as a whole at a 95% confidence level is a maximum of 1,67%.

About Ipsos: The Home of Researchers

Ipsos is an innovative, entrepreneurial, client-focused organisation, providing research services to clients on a global basis. We set ourselves high standards and aim to work collaboratively in partnership with our teams in order to service our clients most effectively.

Ipsos is proud to be the only global market research company that is still controlled and operated by researchers. We aim to remain the natural home for intellectually curious and passionate researchers.

[1] Please note that an open-ended question was asked, thus respondents could mention anything spontaneously. The results were coded into categories after the interviews were done.

[2] The question was: “Which of the issues that you just mentioned is the most important to you personally?”

[3] Many issues were mentioned – please keep in mind that all results of 2%+ are shown.

[4] 27% of adults have indicated that they receive a government grant.

[5] Keep in mind that fieldwork for the study was conducted prior to the energy crisis and the latest wave of load shedding.